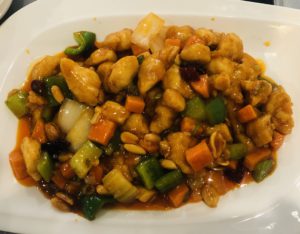 A Legend of Kung Pao Chicken

Origin, according to legend, Kung Pao Chicken was invented by Ding Baozhen, the governor of Sichuan during the reign of Emperor Guangxu of the

Qing Dynasty. When a guest came to visit him, he told his family’s chef to cook the dishes. Because Ding Baozhen was later named Donggong Shaobao (Prince Taibao), he was called “Ding Gong Bao”, and this dish is also known as “Kung Pao Chicken”.

Kung Pao Chicken Cooks different vary in different places. The main ingredient of Kung Pao Chicken is chicken, and the ingredients are peanuts, green onions, and spices. Due to practice in a wide range of circulation, the practices vary from place to place in China.

There are a little different in Sichuan, Shandong, Guizhou, and Northeast in China. Shandong can use chicken legs to cook. Guizhou’s cooking way with sour and sweet.  After the Kung Pao Chicken is introduced into North China and the Northeast, local cucumbers or carrots will be added to adjust the original spicy taste, but the vegetable flavor is completely different because of the moisture of the vegetables. It is very interesting about history of Kung Pao Chicken.

Big thousand chicken: during his stay in Canada, Zhang Daqian changed his practice of Kung Pao Chicken according to his preferences and taught the local chef.

The chef named it “Da Qianji” to commemorate. The difference between Daqian Chicken and Kung Pao Chicken is the use of finely peeled, boned and peeled chicken legs, with dried chili and bean paste as flavor, and without peanuts.

Kung Pao Chicken is a traditional dish from the Sichuan of China. It is made from chicken, dried chili and peanuts. Because of its spicy entrance to mouth, the tenderness of the chicken and the crispness of peanuts are widely welcomed by the public. Especially in Western countries such as the United Kingdom and the United States, Kung Pao Chicken is “proliferated” and is synonymous with Chinese cuisine. The situation is similar to spaghetti in Italian cuisine.