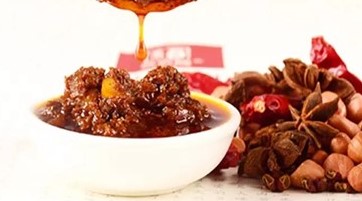 Chinese Sauce is an important cooking condiment for most of people in Eastern culture. People with Chinese or Asian backgrounds can’t leave the sauce mostly when cooking. The sauce is made from fermentation technology, and the first group to master the fermentation technology is from China. The Chinese ancestors made extensive use of the fermented salted foods of various animal and plant materials.  “made it with beans and wheat flour”, which means that people at that time used beans and wheat flour as raw materials to make a pre-sauce and then add salt to make

“Chinese sauce”. This affects the Chinese people. Food culture has evolved from ancient times to the present. And it has also deeply affected many countries and nations in the vast areas of the entire Eastern world. Today, our understanding of the “sauce culture” can be summarized as follows: “Chinese sauce” is a fermented food made from soy as the main raw material, and processed by a multi-process such as salt fermentation. “Chinese Sauce Culture” is the sum of things that people associate within the process of making and using sauces, which are gradually formed by customs, thoughts, and behaviors.

History of Sauce, from “醢, mince” to “sauce”

Discussing “Chinese Sauce” and “Chinese Sauce Culture”, of course, we must start with “mince”. The so-called “mince”, according to the history book, is a fermented meat sauce served in a small jar of utensils. That is to say, at first, most of the ancestors’ sauces in China used animal meat as raw material to ferment and ferment them with jars. From “Zhou Li”, “Yi Li”, “Book of Rites”, “Spring and Autumn Zuo Zhuan”, “Spring and Autumn Rams”, “Spring and Autumn Valley Liang Chuan”, “Book of Songs” and other pre-Qin Yuandians have more descriptions and records. According to “Zhou Li”, Zhou Tianzi must follow the system with 60 “mince” varieties every time he eats dinner. Besides, “Zhou Li”‘s “food doctor” and “dietitian” posts also said separately “Bai Shi, Bai Sauce” and “There are hundreds of sauces.” However, we have not seen the exact written records of the names of these 60 varieties of 醢, 100 or 120 sauces. In the words of Zheng Xuan, “the reporter could not record twice, but it is also At the same time, we can tell us that as early as about 3,000 years ago, the sauce in Chinese life can be said to be very rich.

As a salty sauce and other kinds of savory foods, there is no doubt that it is indispensable for the salty seasoning, salt. The daily diet and life of human beings are inseparable from salt (as is the case with other animals). The invention of sauces is based on the needs of this life and the need for life.

Since the beginning of the Han Dynasty, it is a cereal sauce that is made with the bean and wheat flour. This kind of “soybean and wheat flour” cereal sauce is almost the same as the two types of bean-based and wheat-based ingredients, which means that the bean paste and the wheat sauce are main Chinese sauce, two major categories. Throughout the years, bean paste has always been a large part of Chinese sauce. Of course, the types and varieties of Chinese sauces are not limited to only two types of soy sauce and wheat flour sauce. According to the basic classification method of the Chinese food brewing process, Chinese sauce can be roughly divided into the yellow sauce, flour sauce, and clear sauce (soy sauce). More than ten categories, such as cardamom, sweet flour sauce, broad bean paste, chili sauce, peanut butter, sesame sauce, caviar, jam, vegetable sauce, shrimp paste, and bolognese sauce.https://en.wikipedia.org/wiki/Soy_sauce

The northern part of the yellow sauce is also known as the “miso sauce”. The tradition is the afternoon of the second day of the second month of the lunar calendar.

The soybeans (soya beans) are selected, and the black soybeans (worry that the black skin affects the sauce color), the deteriorated beans and other impurities are removed. Clean with water for three times until being cleaned, into the cauldron to stew, waiting for the soup to be clean (not to be burnt), the beans are very smashed by hand, and the heat is turned off and sit there to the next morning (the main purpose is to turn the cardamom into red ). Subsequently, the beans were smashed into a reamer (a hand-made tool for cast aluminum) into a uniform mash, or repeatedly crushed on a slab (a large household is used for a large number of domestic workers for a year-round, requiring a large amount of sauce, so it is processed with a roller) It is muddy, and it is also directly smashed into the bean with a thick dry rod in the pot (although such peas are not easy to be uniform). The sauce is suitable for dry and wet. If it is too dry, it is difficult to agglomerate into a blank, which affects normal fermentation. If the moisture is too much, the sauce is too soft to be formed, and the core is easy to damage heat, insects, and stink.

All kinds of cardamom are the traditional family products of ordinary people in the southwestern provinces. The farmhouses in many counties in Sichuan have such vivid and colorful cultures: such as the practice of light soybean meal: steaming the beans into the clear water for a night, steaming them into a jar or altar, to be used for the insulation of the tank or the altar. Wrap it up. After a few days, the soybean meal is not sour, and the pepper, pepper, ginger, basil leaves, and a little salt are mixed and eaten evenly. You can also buy watercress (pea or broad bean) from the store in the fall, and then mix it with chili, pepper, cinnamon, star anise, ginger, salt, and other foods according to your habits. Each household is also accustomed to using bean curd to reprocess and mold to make fermented bean curd. The home-made bean curd is a flavor that is used by households for a long time.

The name of soy sauce in Chinese historical literature is the words “clear sauce” or “soy sauce”, “bean sauce clear”, “simmered juice”, “soy sauce”. Song Dynasty has been more common in literati transcripts, such as the Northern Song Dynasty Su Shi (1036~1101) has recorded the life experience of using vinegar, soy sauce or lamp core to clean ink marks on golden enamel and fan surface: “Golden enamel and fan surface, wash with vinegar or soy sauce with a new pen, or go to the core of the lamp.” “Compendium of Materia Medica” made a detailed record of the preparation of soy sauce: “The bean paste has the genus of soybean, adzuki bean, pea, and soybean oil. Soybean oil method: use three buckets (Dou) of soybeans, boiled in water to be rotten, use flour twenty-four pounds, mix and simmer into yellow. Every ten pound  add the salt eight pounds into it , well water forty pounds, stir under sunshine into the oil to collect. “After the Ming Dynasty, Dai Yu’s “Remaining Moonlight·Nanjing Soy Sauce”, the Qing Dynasty Gu Zhong’s “Yang Xiaolu”, Qing Zhongye Li Huanan’s “Wake Garden Record” and other food books have been recorded in detail.

When I was child, I saw my mom made home sauce by using steam flour, put into a jar, wrapped and covered with thick clothes and hidden somewhere with high temperature.  It was very interesting!

as the “wheat sauce” process: that is, soaking wheat for one night, steaming and spreading evenly, so that the yellow mold can fully grow and multiply. According to the ratio of water and salt, use water one Dan and 6 Dou (1 Dan equal 10 Dou, 1 Dou equal 10 Liters) and salt 3 Liter, the salted soup is boiled. After the sedimentation, the clarified salt water is taken into the urn. The wheat with long mold is put into the mixture and stirred evenly. After 10 days of sunlight, it can be eaten. The characteristics of the “Food Classics” wheat sauce process are: all the raw materials have undergone the process of koji making, and many beneficial microorganisms can fully reproduce and produce corresponding enzymes, and the decomposition and synthesis in the fermentation process can also be fully exerted under the action of sunlight.

After the Chinese sauce culture went abroad, it began to follow the customs in other foreign countries, and it took a place to root, and blossomed. Korean sauce, Japanese sauce, and sauces in vast areas of Southeast Asia, etc., made full use of local raw materials and adapted to the needs of local people. The local clever use of re-creation makes the Chinese sauce culture more colorful and blessed countless people. The historical existence of the “pan-Asian sauce culture circle” is an indisputable fact, and it is a historical fact that basically coincides with the “Chinese food culture circle”. If you want read more, please click reference source.